PERCEPTION
The definition of AI is based on the nature of the problems it tackles, namely those for which humans currently outperform computers. Also , it includes cognitive tasks. A part from those two aspects, there are many other tasks(that also fall with in this realm) such as basic perceptual and motor skills in which even lower animals posses phenomenal capabilities compared to computers.
Perception involves interpreting sights, sounds, smells and touch. Action includes the ability to negative through the world and manipulate objects. If we want to build robots that live in the world, we must understand these processes. Figure 4.3 shows a design for a complete autonomous robot. Most of AI is concerned with only cognition, we will simply add sensors and effectors to them. But the problems in perception and action are substantial in their own right and are being tackled by researchers in the field of robotics.
In the past, robotics and AI have been largely independent endeavors , and they have developed different techniques to solve different problems. One key difference between AI programs and robots is that AI programs usually operate in computer-stimulated worlds, robots must operate in physical world. For example, in the case of moves in chess, an AI program can search millions of nodes in a game tree without ever having to sense or touch anything in the real world. A complete chess-playing robot, on the other hand , must be capable of grasping pieces, visually interpreting board positions, and carrying on a host of other actions. The distinction between real and simulated worlds has several implications as given below:
A design for an Autonomous Robot: 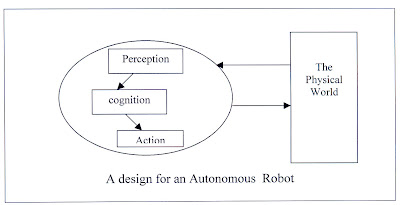